Blazor has three hosting models - as I see it :)

We will look at them in brief below.

Server hosted implies the entire application being hosted on server. A razor-thin (no pun) app is delivered to client and there on client relies on server for everything.

Though this may sound primitive, but works wonderfully well - provided you have good connectivity to server and a fast-enough server.

At the same time -

I think server-hosted models will be a boon to a whole lot of stupid enterprise applications that have been begging for an upgrade since Y2000. I see server-hosted Blazor as the new client-server - only that we now follow universal standards :).

Server-side hosting is also easier to control and implement - Microsoft plans to deliver these as part of the .NET Core v3 full release later this year. The only positive I see here is the web-socket like SignalR. We do not need to write a lot of boiler-plate to control those server-client interactions but let the underlying framework handle them.

Client-side hosting falls to the other extreme. The app delivers itself to the client and runs as a full-fledged .NET application using Mono within the browser.

Once the app DLLs (yes, DLLs) and WASM running infrastructure is downloaded to client, the client does not need the server anymore.

I could also deliver this blog entirely to your desktop - take that, Blogspot.

On the flip side -

The ++ Sub-division and Selecting a Hosting Model

When you click on New Project in Visual Studio, and select Blazor template, you will see the exact two options outlined above. 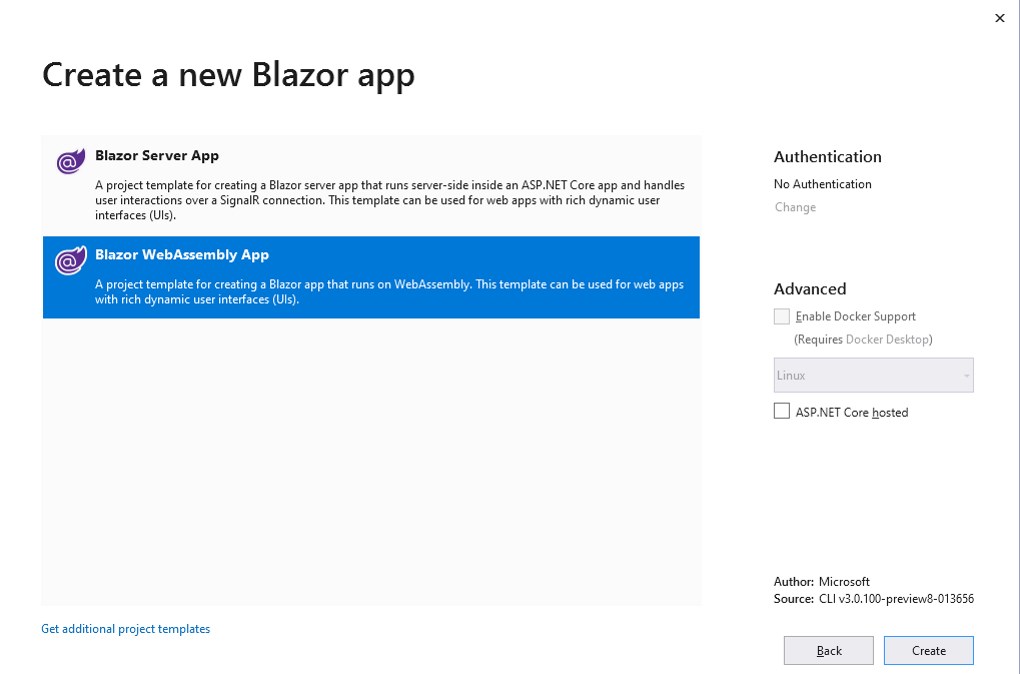 In addition to the options, you will also see a checkbox called ASP.NET Core Hosted for Blazor WebAssembly App. This is the result of a simplified model in Preview 8, and which I have come to appreciate.

By selecting the box, you are instructing the the scaffolding to create -

Any web app is not an island by itself. Using a core hosted model with WASM, we can create applications that do most of the work on the client-side, but can also fall back on server for sensitive/proprietary business logic, maintaining centralized data store, and other such use cases.

I am personally excited about the server-hosted WASM. That is the future, folks - does not matter whether you mark or unmark my words.