Laravel is my development platform of choice lately. And, this brought in a host of interesting tools to my PC.

Earlier days were simple enough - just use XAMPP to host the site locally and be done with it. Yes, there were other tools but none had the same charm. XAMPP was simple and got out of the way of the development lifecycle.

Come 2018, I am spoilt for choice in the Javascript world. The editors, transpilers, packagers bring in a sophistication to the development process while making the overall development easier. Until the time modern Javascript happened - I couldn’t even make the words ‘sophistication’ and ‘ease’ coexist in a sentence.

So, it was with some trepidation that I ventured into the Laravel. There was no need to be afraid though.

laravel new my-amazing-project was good to create projects on the go followed up by the amazing, omnipresent scaffolding. I quickly embraced the php artisan ** world with gusto.

Despite Laravel’s default toolset there was a nagging sensation that I should be automating at least some part of the process or change the way I develop stuff.

XAMPP did not cut it anymore. I could now poke holes even at ‘once in a century’ events of changing PHP versions through XAMPP, or how it could not keep up with the ‘AMP’ stack quickly enough. (Believe me - that is more than sufficient). I also tried WAMP Server, and AMPPs (by Softaculous). They were different flavours of the same, with a few enhancements thrown in.

I was looking back to adapt to php artisan with some command line magic. Until I met fell in love with Laragon.

Laragon is the sophisticated development platform that everyone was waiting for. 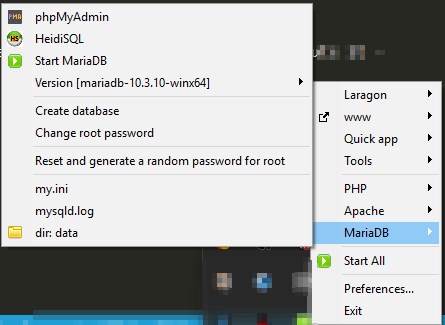 As the developer puts it -

‘Too many adjectives’, you say? Just download Laragon and try it out.

Laragon is not limited to Laravel or PHP. Laragon is and will be my platform of choice for some time to come.

May I need to mention once more that I have doubled down on VS Code?

There have been times that I have been annoyed at Code’s performance, but none of the editors accomplish so much - paid or free. I use Notepad++ when I have to open up multiple projects for “reference”.

I use three extensions in VS Code for Laravel-

If you use Vue with Laravel, “Vue 2 Snippets” will help. I quite did not use snippet extensions for Bootstrap or Bulma - I am not that proficient with CSS yet and I have to manually check the UI and copy/paste code from the respective sites.

I have been a long time Chrome user, but started using Firefox Developer Edition. It just looks cool out of the box - but both are equally good. (Although you have to install more than a few extensions in Chrome).

One of the browser helpers I liked was Laravel Debug bar. It provides nice dashboard of everything that you need to know while debugging Laravel.

Docker is on my list of to-dos to make deployments easier, but I am afraid it will take some more time for me to get there! I am more than happy using shared / cheap hosting for now to host Laravel projects :)